I’m in love with Kelly Dodd’s navy dress on WWHL! It is flattering because of the wrap, it’s sexy because of the satin, and it’s playful with that yellow sash. Talk about flattering, sexy and playful, can you believe the milk man is on tonight? This guy has had a story line of his own from the East Coast to the West, and while he seemed like a dud on his one time appearance, I was excited to see him bartending.

I don’t know who was more excited, Chrissy Teigan (pronounced “tie-gen” for those of you who have been living under a rock) about being on the show with Kelly and the infamous milk man, or Kelly for being on with the hottest non-housewife on the planet! Speaking of which, why doesn’t she have a Bravo show? She definitely would hold her own in explosive fights, and her instagram comments would be hilarious! Or better yet, give her her own commentary show on Bravo, like Jerry O’Connell’s new show that premiered tonight! 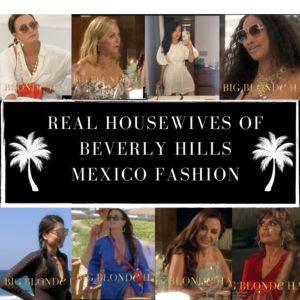