Even though a week has passed, there are still a lot of lingering questions on my mind from Peggy’s Real Housewives of Orange County dinner party. Where were Jim and Slade, really? Do I need to start wearing red lipstick? And, most importantly, where in the world can we find Tamra’s knock-out dinner party dress?

Well, lets just say that Tamra thought her dinner party dress was so nice, she wore it twice…

Tamra’s dress from Peggy’s dinner party was the same ‘Invisible Belt Dress’ that she wore while working the runway at Marisa Kenson’s fashion show in the “Kiss and Tell” episode.

This dress, also seen on Katie Perry (below), can be yours by visiting MarisaKenson.com. The dress comes in different fabrications, and if you wear it once you’ll wonder where it’s been all your life. The best part is that you don’t need an OC bod to rock it, as it’s a flaw-hiding and figure flattering!

Kenson has been in the fashion industry for over 20 years, and also works with OC style favorites Vicki Gunvalson and Peggy Tanous, The Real Housewives of New Jersey and a laundry list of other celebs. Her press page looks like a who’s who of Hollywood. The best part is, the designs can be yours and it’s as easy as visiting www.marisakenson.com.

*style is available for custom order

Have you seen something on a celeb that you can’t live without? Email me at Lauren@BigBlondeHair.com and I will hunt it down for you. 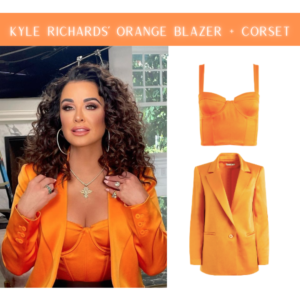